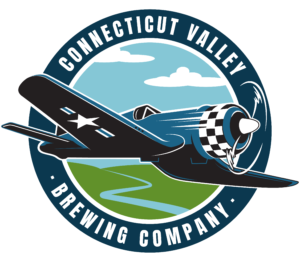 The Connecticut River Valley has been a hub for American innovation for hundreds of years. Our story of innovation dates back to the early 2010s when a new, revolutionary style of beer was taking the brewing world by storm: New England Style India Pale Ale (NEIPA). With the launch of our flagship brew Trailblazer, an early NEIPA in the industry, we began our journey to crafting a brew for every palate. From stouts to sours to seltzers to our distinctive Spiked Smoothies and more, we believe that great brews are shaped by thinking outside the box.

Everything we do pays homage to the story of Connecticut pioneers who helped blaze the trail we stand on today. Our logo features the F4U Corsair, officially designated the Connecticut State Airplane in 2005. The Corsair is an incredible testament to the spirit of the state with over 12,000 of the aircraft built between 1938 and 1945 in Connecticut. Our beers like Trailblazer, A Fantastic Voyage, The New Frontier, and Into the Woods celebrate the places, people, and stories that have helped shape Connecticut into the innovative hub it is today.

Since 2018, our taproom and brewing facility has been based in our hometown of South Windsor. In late 2019, we launched Birdhouse Coffee, a café and roastery that celebrates another love of ours: ethically-sourced and produced coffee. In 2021, we launched our own in-house kitchen producing a variety of shareables, crowd-pleasing entrees, breads, pastries, and more.

We were honored to be named by the Hartford Courant as the Best of Hartford 2021 Craft Brewery, an honor chosen by a readers’ poll and awarded to local businesses and organizations throughout Connecticut.