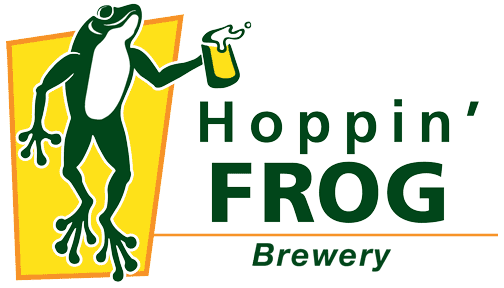 Hoppin’ Frog Brewery is a small, hands-on brewery in Akron, making very flavorful beers in the most flavorful styles. We brew the highest quality beer with an uncompromising focus on detail, from the ingredient selection to the brewing process.

After nearly 7 years in business, our highly anticipated Tasting Room opened June 21st 2013, offering fun, adventurous dishes that change with the seasons, and a  vast array of the highest quality beers.  With an experienced and enthusiastic  chef in the kitchen, the focus is on freshness and vibrant flavors by using superior-quality meats and cheeses to make only 10 or 12 tasty offerings,  including appetizers, sandwiches, and entrees.  And, with 24 taps plus a special  Rare Beer List at the bar, guests can order 5, 8 or 16-ounce glasses of many  Hoppin’ Frog beers on tap, as well as several very high quality guest beers.

Hoppin’ Frog is the concept of owner and established brewmaster Fred Karm, who has designed and produced 22 award winning beers at the Great American Beer Festival and World Beer Cup, the two most prestigious contests in the world. Hoppin’ Frog Brewery was established in 2006, and now distributes beer in 19 states and 15 foreign countries.

Fred is a life-long Akron, Ohio resident, a graduate of the University Of Akron and has been a brewer of specialty beers since 1994.